Last week we had the first field tests. I had to travel all the way from Zurich to Biasca in the south of Switzerland and south of the Gotthard mountain. We started with a short introduction to learn what the state of our system is. After that we checked the version of the different subsystems. Our system contains interlocking, RBC and centralized train control (CTC). The versions we found were more or less what we expected.

At this time I saw an occupation moving in the tunnel – so this must be a train! I took the opportunity an switched the lights to green to protect the trains route. The train cleared the route how it must be – again a positive result. The train was from the construction work and moved concrete.

Some other tests took the rest of the day. The other day we started with power loss tests. We switched off some conductors (one of three) and looked to the system. On one hand we looked to the messages for the operator, on the other hand we saw that the system still was running. So our concept of redundancy was good – what we knew before from lab tests, but we had to know whether the installation in the field was done correctly.

After that work we went to the operators place. From there the tunnel will be operated and also the whole italian part of Switzerland. This building is breath taking – absolute cool architecture! See below. 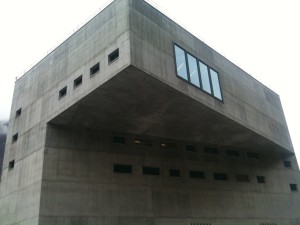 The real field test with running trains will start at the end of 2013 – I will be there.
In the mean time the GLAB will produce a lot of results.